Last year it was all about “Frozen”. Everything was Frozen to the point where parents were wishing Disney had not put the darn movie out. Nevertheless, a female title character and a catchy song increased every little girl’s dreams of Frozen toys (and boys too).

The 2013 movie Frozen earned over a billion dollars at the box office. It became one of the highest grossing films and earned two Academy Awards. With the great animation, fantastic soundtrack, and lovable characters, it’s not hard to see why children everywhere loved the movie.

The success of the movie spawned a flurry of beloved toy characters that flew off the shelves as soon as they arrived. The movie featured the much loved Elsa as one of the characters.

As the movie progressed, Elsa became a sort of Snow Queen. After fleeing from her childhood home because of her power to bring forth snow and ice, she created a new castle for herself made of ice where she hid herself away.

You can get the Elsa character with the Disney Frozen Sparkle Princess Elsa Doll. The doll is dressed in the same kind of sparkling gown the character wore in the movie. The popularity of the doll landed it on several Most Wanted toy lists.

Elsa’s younger sister, Princess Anna, is a free spirited princess who grew up delighting in her sister’s magical ability. But when Elsa’s powers accidentally harm Anna, Elsa withdraws, leaving Anna to grow up lonely and craving her sister’s company.

Anna is impulsive and adventurous and believes in the goodness of her sister when others think she’s evil. One of the hot selling toys for this movie character is the Disney Frozen Sparkle Anna of Arendelle Doll.

The doll comes dressed in a beautiful blue skirt decorated with flowers. She wears a decorative bodice and a cape with a gold pin at the neck. Like her sister doll, Anna also wears a tiara. 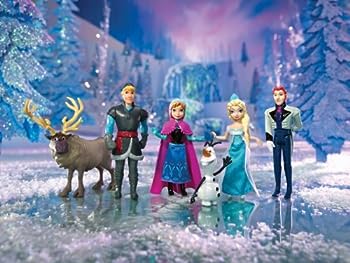 Kristoff is the hero in the movie and it’s him that Anna turns to for help in locating Elsa after her sister has run off. The Disney Frozen Sparkle Kristoff Doll is a replica of the character and even wears the fur trimmed tunic like the character wore in the movie.

Kristoff has a beloved pet reindeer, Sven and the two are constant companions. Sven is instrumental in helping Kristoff and Anna reach their destination. The Disney Frozen Exclusive 16 Inch Plush Figure Sven is made of huggable plush and is patterned after the movie reindeer.

Olaf is the snowman that came to life as a creation by Elsa when she and Anna were younger. The snowman comes to life later in the movie and adds great comedic relief. You can get the doll version in the Disney Frozen Olaf Doll.

The doll can come apart just like the movie figure and if you press down on his head, the expressions on his face change. In a surprise twist in the movie, Prince Hans, thought to be a love interest for Anna, turns out to be quite the villain.

The Disney Frozen Exclusive 12″ Classic Doll Hans is dressed as the prince was in the movie with a long dress coat, vest and cravat. He also wears the dark trousers tucked into knee high boots.

As anyone who has been around children over the last few years you already know you can’t go wrong with any Frozen toy. You’re only problem will be trying to find one they don’t already have.