NERF guns just never seem to go out of style. Can you name one kid who hasn’t had one? Even adults love to get in on the action. Here’s the latest model right in the mix with the rest of the 2015 bestselling toys.

Anyone who’s ever had a rousing game with Nerf blasters knows exactly how fun these toys can be. With every new development, the blasters contain more ways to have fun, more ways to win and the potential for unlimited kinds of play.

comes on the scene to take play to a whole new level. With this blaster, users can now create their own blaster the way that they want it and one that’s suitable for the gameplay that they engage in. This blaster gives users the ability to make over 30 different combinations so playing to win has never been easier. Depending on the blaster that you combine to create that’s uniquely yours, you can literally own the game that day.

With the targeting scope, you’ll never miss a direct hit again. By lining up your target, you’ll knock out the opponents faster than ever before. With the drop grip, you’ll be able to stay in the heart in the action without worrying about losing your hold on the blaster.

It has a system that can churn out the darts at maximum speed for faster play and more direct hits. The blaster is loaded with power and has the ability to launch the darts at a target from a great distance, even as far away as 90 feet.

It has an accuracy level that’s compared to none so when you go after a target, you’re going to score. The blaster comes with a banana clip that allows it to hold 10 darts. 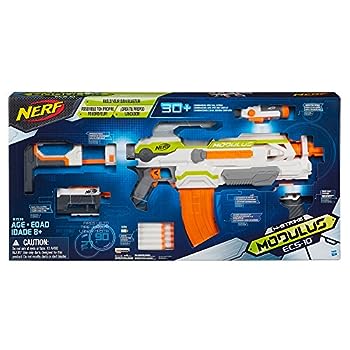 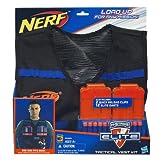 What this means for you is less time spent reloading darts and more time in the actual game. While other opponents are ducking out of sight and trying to load, you can slowly advance your ground until you gain the ultimate victory.

Though this NERF is big and has the firepower that you’re looking for, it’s not bulky or heavy. It’s actually lightweight for all the ability that it has. The 10 darts that the banana clip holds are included with this purchase, so you can get started playing right away.

But if you don’t have a supply of extra darts on hand, you’re going to want to go ahead and order those. You don’t want to stop the play because you ran out of darts. Plus, the more you have, the more fun you’ll have because you can get together in a group play. It will work with the Elite series and other darts. The NERF blaster is suitable for adults or kids that are 8 years old and older.

Judging from my own experience, if you have multiple children in your house (hubby included) you are going to need more than one of these NERF Blasters.