Paw Patrol is a popular Canadian series viewed in the United States on Nick Jr and it has quite a following among preschoolers. Chase is the German Shepherd police dog involved in solving various missions. This toy provides hours of fun as children work with Chase on his latest adventure. Kids really enjoy exploring real life adventures based on the characters from the shows that they love. With the Paw Patrol Mission Chase toy, your child will be able to use their imagination to create a variety of fun-filled adventures.

With their faithful friend Chase guiding the way, they’ll have plenty of successful rescue missions. The pup has 24 adventures that your child can work with the character to complete.

It’s easy to get started. All your child has to do is push on the badge. When they do, the guidelines about the mission are explained. These missions are all based on actual missions that were aired on Paw Patrol.

Your child will feel as if they’re right in the middle of a show’s rescue. The pup also has the ability to say more than 130 different phrases that can delight your kids. These phrases are intended to help the child understand and be able to finish the different missions the pup will share.

When you first get the pup, you can listen to the training feature where he’ll teach you how to be able to interact with him. Though the pup has a lot of really cool features, one of the ones that kids just love is the spring loaded net launcher. To activate this, all kids have to do is push on the pup’s backpack. To engage in a rescue, you’ll want to launch the net and when you do, the cute Itty Bitty Kitty or other characters will be safe and sound once again.

Another feature that kids enjoy is being able to use Chase’s megaphone to amplify their voices. This feature is found in the pup’s backpack and like the net, is also spring loaded.

Kids will want to use the megaphone to call out for help but it can also be used as a light. All kids have to do is push the button to light up any area. It’s handy during the day when you need to search under furniture or during the times when the mission has to be completed at night. 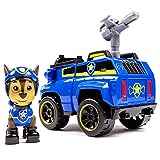 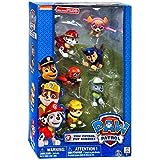 The pup’s backpack also has the manual option. Kids can engage with the pet by singing along as the pup sings. He even bobs his head in time to the music. The pup is suitable for kids who are 3 and older.

He does need batteries to be able to work but those come with the purchase. When you buy the pup, you get the toy, the backpack, the launching net and the flashlight. Those items are located inside the backpack.

Not only is the Paw Patrol Chase character a real cutie but he’s also there to help kids process the sequencing of events to get a final result. A fun learning toy for sure.