I started reading to my son from the minute he got home from the hospital. I wanted to give him the gift of books and my love of reading from the get go. It’s paid off and I encourage anyone looking for a toy for a child to seriously consider throwing a book or two into the mix.

We also want to choose toys which teach our children, and Rue is a winner of the Iparenting Award and Creative Child Top Toy Award. Your child will learn about self-esteem, confidence and his or her perceptions and emotions.

Rue’s storybook is titled, “The Nose That Didn’t Fit” and is designed and written for kids of all ages to learn about insecurity that happens when they don’t fit into the “norm” and how to deal with it.

It’s a sweet and loveable monster that your child will enjoy and keep for his kids. You may have seen and purchased other WorryWoo Monsters such as Twitch, the Monster of Frustration, Fuddle, the Monster of Confusion, Nola, the Monster of Loneliness and The Monster in the Bubble about fear of change.

These WorryWoo monsters capture the emotions of children and help them learn to concentrate on the positive rather than the negative. They’re emotions that most children deal with at some point in childhood and are dealt with in a gentle and educational manner.

WorryWoos are soft and cuddly and have unusual features that coincide with the emotion each character is presenting. The monsters come with a storybook that tells a tale also associated with the emotion. 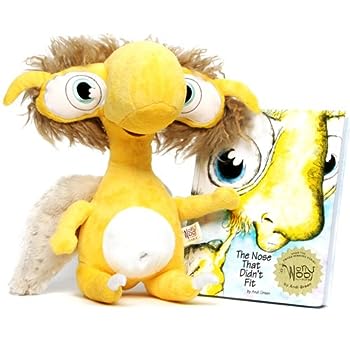 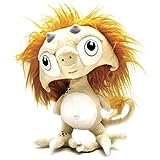 Rue thinks his nose is too big and he feels like the nose doesn’t fit his other features of curly ears, wings and shaggy hair. Rue needs to feel that he’s perfect just the way he was made and that his differences only serve to make him interesting.

Rue is 12-inches tall and has been a star on the Today Show. His story has made him a hit with young and old alike. The storybook is a hardcover, delightfully illustrated, 88-page companion to Rue and filled with silly, but educational stories about how Rue at first tries to cover up his insecurities and then finds ways to cope with his differences.

You may want to check out the other WorryWoo Monsters or the complete, Deluxe set of WorryWoos which includes all six storybooks and all seven plush, Woo stuffed characters. You’ll also receive a guidebook in the set, plus a WorryWoo, 4-Poster pack and a tote for the Deluxe Kit.

You can’t go wrong with any book in the WorryWoo series. Pick up a couple and see how involved the child becomes in reading the book together with you. These are the times you will cherish for life.