Teenage Mutant Ninja Turtles are not new on the scene but they seem to capture the imagination of every young child who encounters them be it in the movies, on TV or in books. Stretch Leo, for short, may be exactly what your budding Turtle Ninja is looking for.

Any child who fancies himself to be a teenage mutant ninja turtle will love the Teenage Mutant Ninja Turtles Stretch ‘N’ Shout Leonardo. One of the most popular and beloved of the turtles, this Leonardo shouts the war cries of the ninja turtles – and the more you stretch his half-shell’s arms – the higher the pitch of his voice.

Playmates Toys specialize in Teenage Mutant Ninja Turtles and have used their wildest imagination to create this ninja turtle who can stretch and shout. The arms are designed to be stretched and to trigger the turtle battle cry.

Yank on the arms a bit and hear Leonardo shout, then raise the arms further and you can hear that the pitch of the voice becomes higher. When you release the arms, Leonardo will finish his word or phrase, followed by the battle cry sound.

This Teenage Mutant Ninja Turtle stands at thirteen-inches tall and fully equipped with a large head, the feet and hands of a turtle and carry their weapons (including the Dual Katana) molded into their hands.

The toy requires three, AAA batteries, which are included with the package. When you hear the word, “Cowabunga,” you’ll know that it’s “Turtle Time.” Your child can stretch Leonardo’s arms up to 8-inches and the more he stretches the higher pitched is the battle cry.

He can engage in battles with Shredder and the Foot Clan and be assured of a win with Leonardo as he shouts various phrases and becomes more intimidating with each shout.

Teenage Mutant Ninja Turtles Stretch ‘N’ Shout Leonardo is a simple toy, like other “Ninja” toys from Playmates, but it can keep your child occupied and engage his imagination like no other.

The Ninja, Raphael, is also available as a Stretch ‘N’ Shout Ninja, but comes in his classically designed suit and dons a red mask rather than a blue one like Leonardo. Get them both and let them battle the bad guys together.

The secret of Playmates success in toy manufacturing is the simplicity and good craftsmanship. They’re sturdy toys that can withstand hundreds of “battles” and rough treatment. 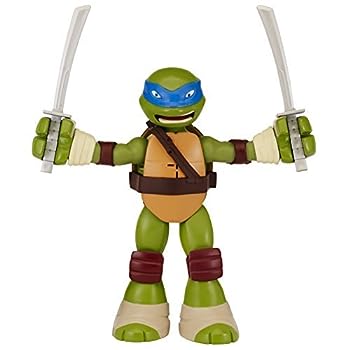 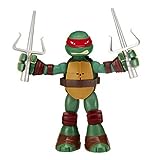 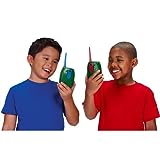 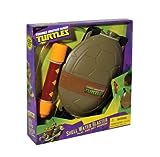 If you have some turtle fans in your house, you can’t go wrong with Ninja Turtle action figures and other fun toys by Playmates. Other of their brands include “Hearts” for girls and “Waterbabies. When holidays roll around, your child will love the gift of “Turtle Time.”

Who can resist Turtle Time?