Dinosaurs have been an extremely popular choice for kids and toys for many a year. My son loved to have dinosaur warfare with his collection of dinosaurs. It might be difficult for some of us to transition from only a few years ago to today when dinosaurs  are now high tech gadgets. The MiPosaur has come to life, figuratively speaking of course.

Some toys are just so much fun that kids hate to stop playing with them. The Wow Wee MiPosaur TrackBall is one of those toys and it’s so fun. It’s like having a robotic dinosaur and a virtual prehistoric pet all rolled into one. The intelligent capability of the toy is nothing short of amazing and kids are going to want this dino bot. He can recognize the different ways that kids communicate with him.

He balances his body using two wheels on the back and he follows the trackball on the front. The trackball is what kids will use to begin the different modes that feature what the MiPosaur is able to do.

The MiPosaur can interact with kids and obey their commands whether they’re given by gesture, through the TrackBall or by using the app. Because the creature has a mind of his own, he does have a personality that will allow him to display moods.

So, don’t be surprised if you give him a command and he has a bit of an attitude about it. Kids can play with the creature, train him and engage in games too. The three ways that kids can engage with the toy are with the app, using their hand or having the toy follow the TrackBall. 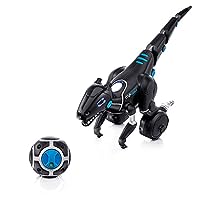 When kids use hand gestures, the MiPosaur will respond based on his mood. How he reacts in one instance won’t necessarily be the same the next time a child does the same hand gesture.

He can react with excitement or he might show curiosity about what you’re doing. Sometimes, he won’t be too thrilled with the gesture and will clearly show that he’s annoyed.

These are going for a walk, fetching an object, dino in the middle, feeding time and dancing. Kids can also us the MiPosaur app to interact with the dinosaur. By using the app, kids can move the MiPosaur around, or take care of him when he’s hungry by giving him various things to eat – including prehistoric men.

Children can cause the creature to fight against other MiPosaurs or dance along with the music that’s played. Kids can also create a trail for the creature to follow. If they do choose to use the path tracing, you need to make sure you have a compatible device such as an iOS or Android. You will need both AA and AAA batteries and these are not included with the purchase.

This toy is a lot of fun and adults will enjoy interacting with their children when they are engaged with their new MiPosaur.